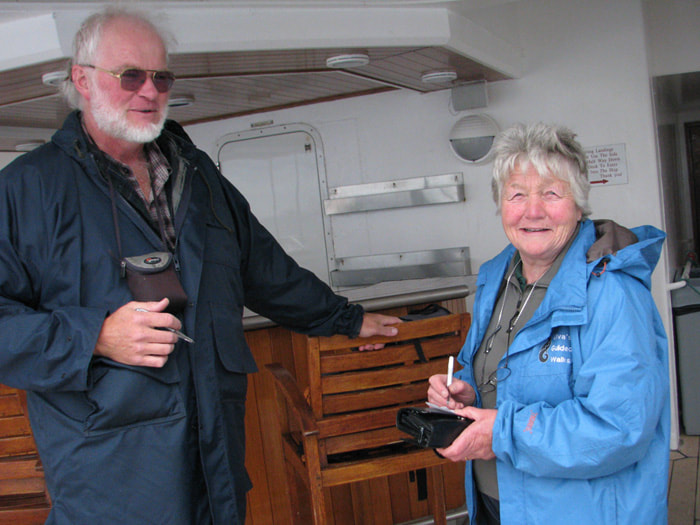 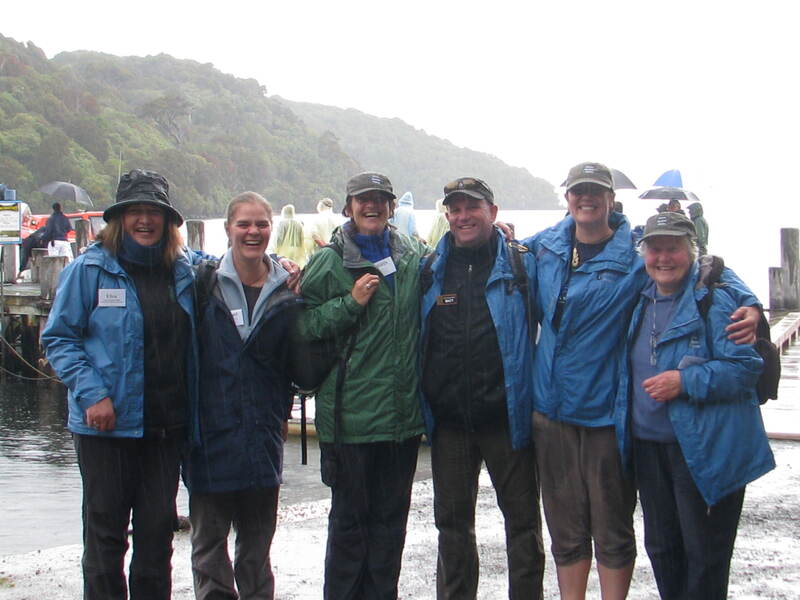 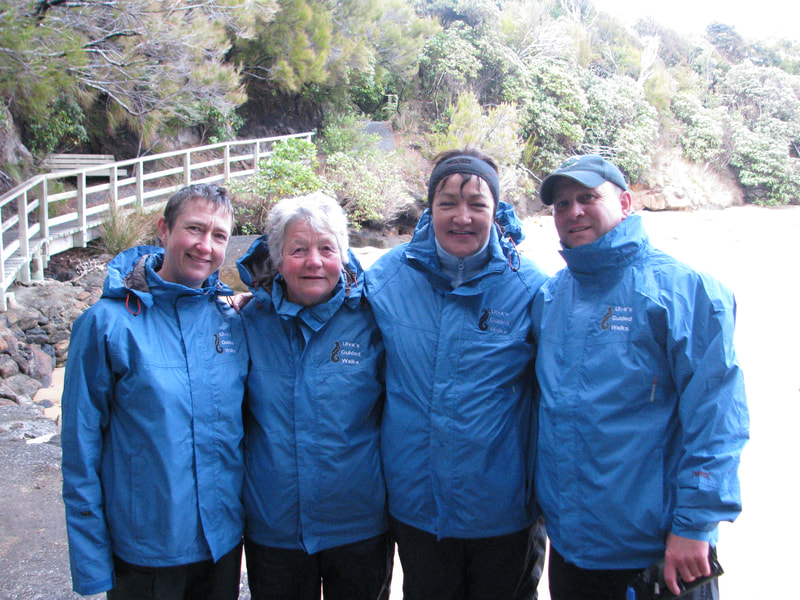 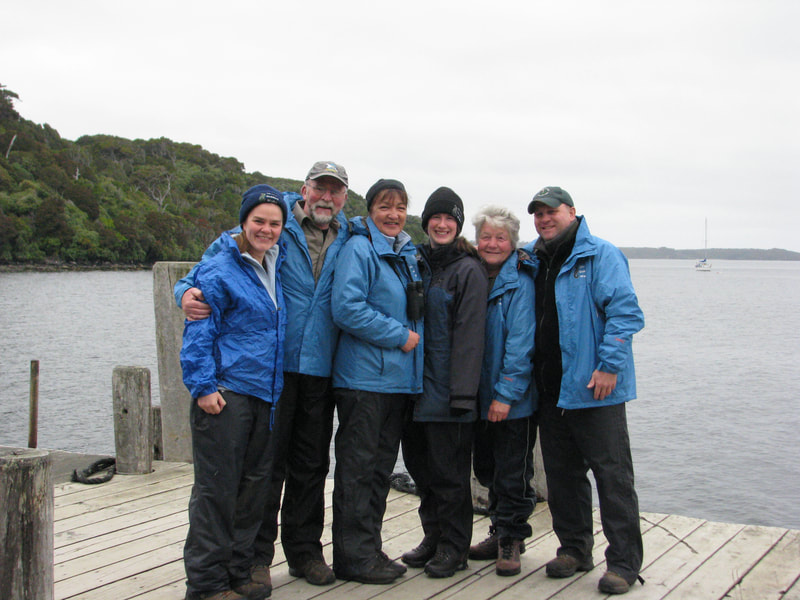 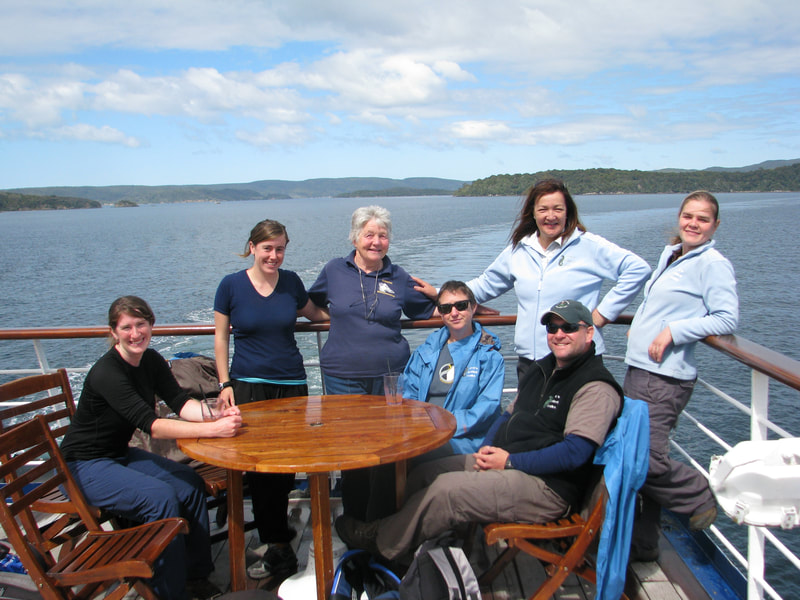 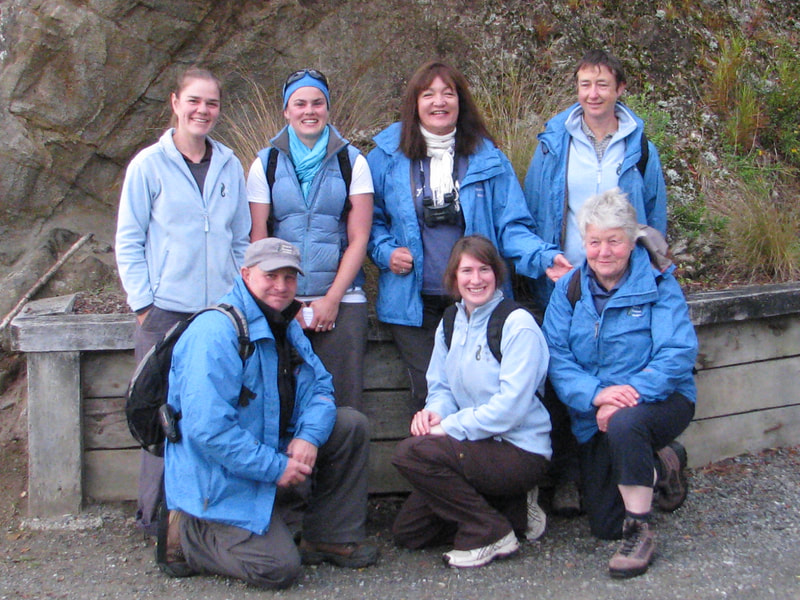 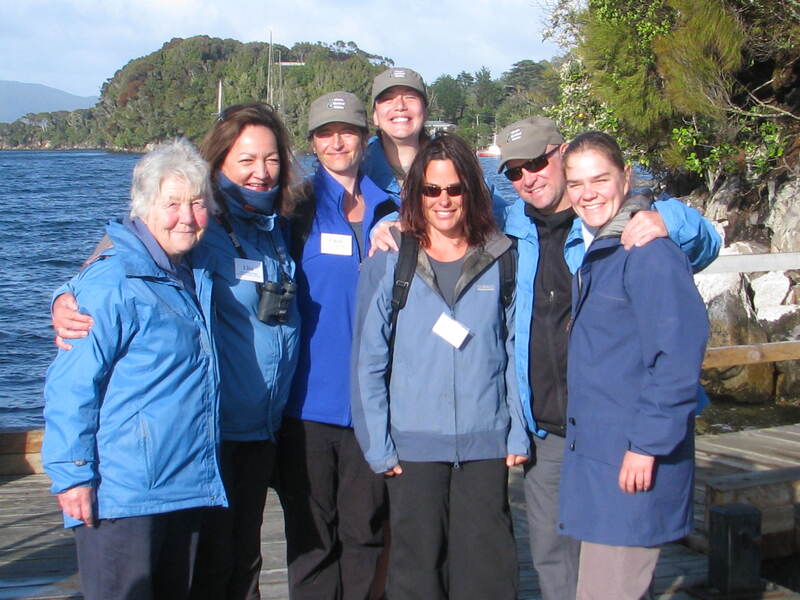 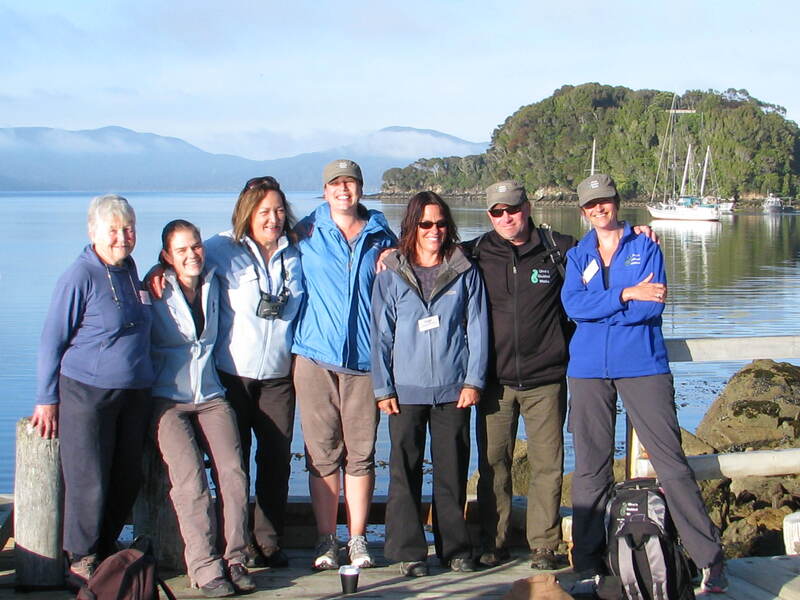 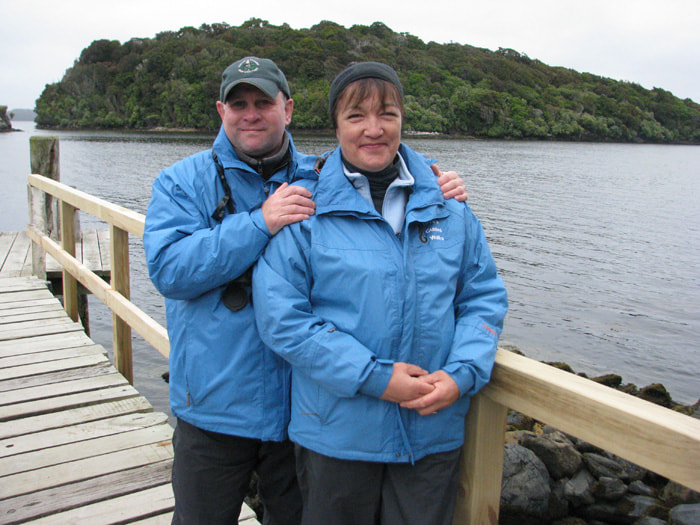 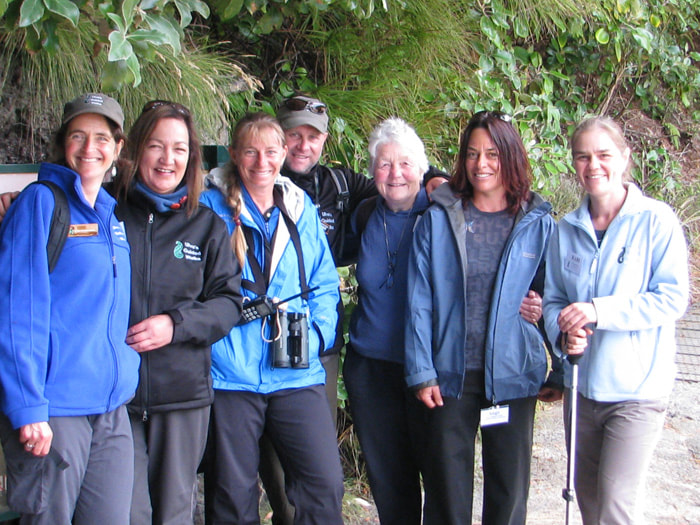 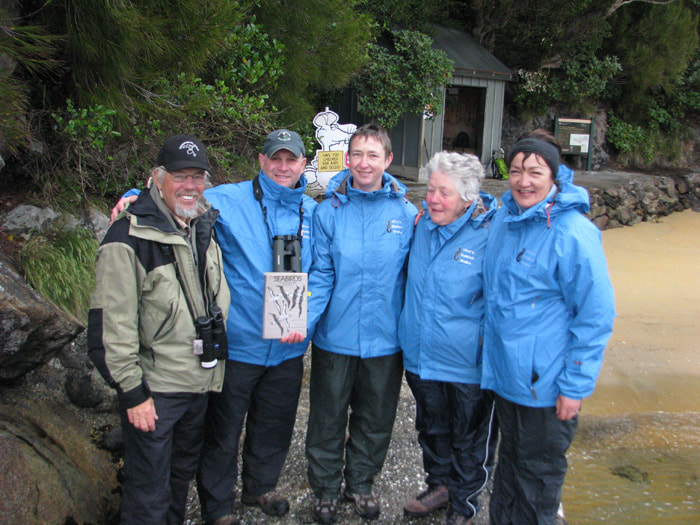 Jules, our computer geek, guide wrangler and diary juggler. She claims not to know Haematopus longirostris from Haematopus unicolour but here she is gawking at birds!
Jules Retberg, Office Manager

Jules has been a bird watching widow for more than twenty years which has given her an insight into the minds of bird watchers, listers, twitchers – and their partners!  Originally from the UK, Jules was a typical London commuter spending a few hours every day travelling by train between home and corporate life.  In her late-thirties, she and her partner embarked on a mid-life crisis adventure, fondly referred to as “11 countries and 300 days without a hairdryer” which ultimately led them to seek a life on Stewart Island, where they have lived and worked since 2007.

Jules is at her happiest when writing fiction.  She loves nature and wildlife although is the first to admit it’s not her natural habitat, as she grew up in the outskirts of London.  She is a self-confessed computer geek; a born organiser and administrator.  “I get to talk to people about how special Ulva Island is and help them make the best of their visit which is often a once in a lifetime trip to New Zealand”, she says, “I’ve been that person myself, full of excitement at finally planning a trip to a place you’ve always wanted to visit, and overwhelmed by the options!  I like to help people make informed choices about what’s right for them.”

When she’s not driving a computer, Jules can be found walking her dog at the beach every day and counts herself incredibly fortunate to live among the fabulous Stewart Island community. 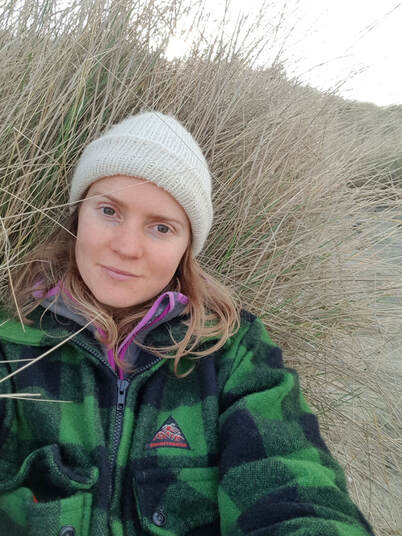 Kia ora I'm Emily, roaming the beaches or wandering through the ngahere is my happy place.  I have a background in ecology and culinary arts so I get pretty excited about our native plants, especially the edible ones. 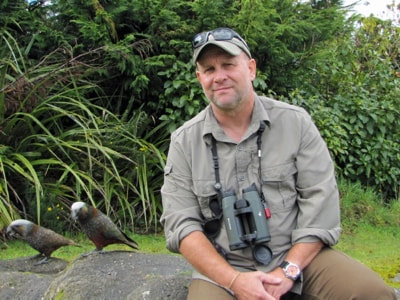 ​Matt was born in Kent in the south east of England and from a young age had an interest in all wildlife but particularly birds.  Early years of birding were spent in his home county of Kent, mainly at Dungeness, Elmley and Oare Marshes with its corridor of marshland and reed beds providing the ideal location for Matt to get his fix of waders - one of his favourite groups of birds.

​The twitching and listing bug soon took a hold and Matt travelled the UK far and wide to get birds on his list, finding a few rarities along the way such as American Robin and Roller. His UK list stands at over 400 birds.  He has since travelled extensively around Europe, North America, Asia, Pacific Islands as well as Australia and New Zealand.  Highlights of these trips included seeing Tiger in India, Leopard in Sri Lanka and Kagu in New Caledonia. The Kagu was on Matt’s “most wanted bird” list and is now on his world list!

It was during one of these trips to New Zealand that Stewart Island found its way into his heart and since 2007 is where he has called home.  As a freelance bird watching guide, Matt's exceptional field experience is revealed as he shows fellow bird watchers the endemics of Ulva Island, the vast variety of seabirds on pelagics, and the iconic kiwi during evening trips.  He has worked with TV and film crews and also works for a local Stewart Island project annually monitoring forest bird call counts.

On his days off, Matt goes bird watching! Stewart Island is not the easiest place to twitch from so he has become a local patch watcher finding his own rarities. These include Black-faced Cuckoo Shrike, White-naped Petrel on Stewart Island and a Nankeen Kestrel in Southland.  In October 2018 along with a group of birding mates he broke the record for seeing the highest number of bird species in Southland in a 24-hour period with 78 topping the previous record by 10.

Matt is a keen photographer and has had images published in books, magazines and websites both nationally and internationally, however he sees himself primarily as a bird watcher.  View Matt's photos on his website www.mattjoneswildlifeimages.com
​
In his spare time, he has volunteered for the Department of Conservation (Kakapo Recovery Programme on Codfish Island, helping to tag Great White Sharks off Stewart Island and gathering data for the Southern New Zealand Dotterel project).  He volunteers for the Stewart Island/Rakiura Community & Environment Trust (Blue Penguin surveys, banding Sooty Shearwaters and Kiwi/Morepork/Weka bird call counts).  In 2011 Matt became Chairman of the Ulva Island Charitable Trust, a group that (in conjunction with DOC) works towards keeping Ulva Island open to the public, remaining free of introduced pests and predators, and aspiring to be one of New Zealand’s premier bird watching locations. 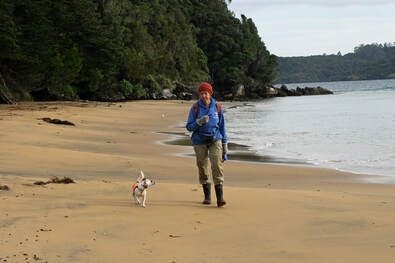 Sandy grew up on Stewart Island and was involved in the early concept and planning to eradicate Norway rats from Ulva Island in the 1990s.

Her career path is firmly rooted in conservation and wildlife with a particular interest in islands - Sandy has been involved in pest eradication projects at Campbell, Codfish and Macquarie Islands. 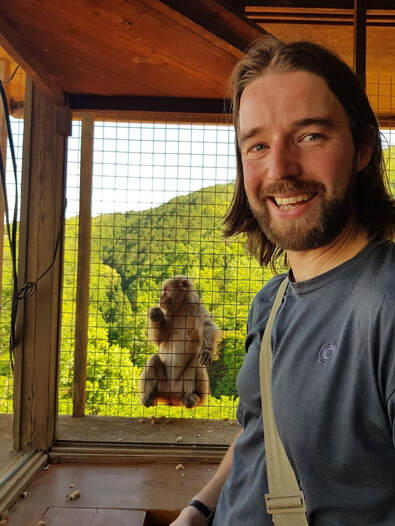 After trying out a career as a plumber (squeezing into small spaces getting wet), and a Royal Navy submariner (much of the same), Dan felt a hunger for big skies and to be enveloped in nature.

His passion for the outdoors came from a childhood of snaring rabbits on the South Downs and wild camping in Dartmoor National Park in England.  Dan has now lived on Rakiura for 8 years and has worked for the Department of Conservation for most of that time in the biodiversity world.  He was involved with some awesome species recovery work as well as welcoming visitors from around the globe and interpreting the conservation values of Rakiura and New Zealand.

After leaving DOC, guiding allows Dan to have a flexible work life with a young family while still being involved with some of the projects and creatures that make this place so special.  Naval habits die hard though, so you will only find this ‘sun dodger’ guiding the nocturnal Kiwi tours at Mamaku Point!